Based on the results of my doctoral study, moving from the bystander stance to the active agent of change stance in the context of digital age propaganda targeting a sensitive and controversial issue cannot be done in a snap of a finger. Changing the posture of the passive bystander to the active agent of change is achieved through five iterative stages, in which learning about oneself is key. The five stages are: Question, analyze, design, prepare and evaluate.

Learning about oneself is key in each stage of the model. In the context of this study, the questioning was facilitated through a series of techniques adapted from the Personal Construct Psychology methodology.

These techniques are detailed here.

These four techniques helped generate enough data to determine the stages of a model to move from bystander to agent of change and to extract the key questioning that allows youth to come back to the source of their thinking about the social media propaganda.

However, I acknowledge that it might be very demanding for practitioners to use because the techniques require advanced research methodology training. The model presented proposes a set of questions that was uncovered through using the four techniques with the 42 participants of the study. Through the synthesis of the results, key questions for each stages were coined. All the questions are followed by the “why?” question. 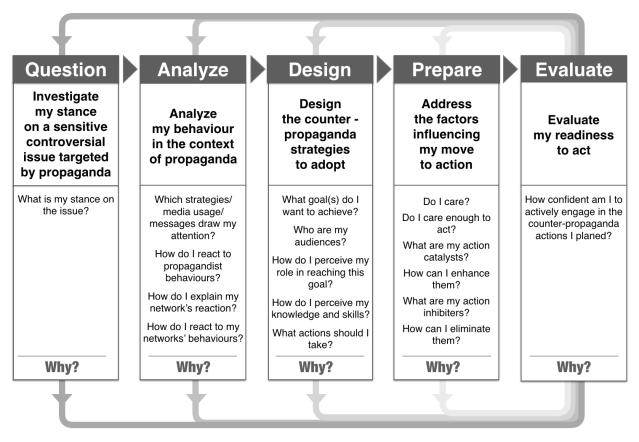 Through the Get Ready to Act Against Social Media Propaganda model I propose based on the results of my study, I posit that learning about oneself and understanding one’s own behaviours in regards to a sensitive and controversial issue targeted by digital age propaganda is key to transform bystanders into agents of change. It helps individuals examine and address what holds them back and equip and empower them to get ready to be actively involved in counter-propaganda behaviours.

However, being ready does not imply going through and taking action. Thus, the model I propose is one phase of a more complex iterative model that would include media literacy, propaganda awareness, action implementations and the evaluation of these actions after adoption.

The strength of this model is its potential transferability to a wide variety of sensitive and controversial political or social issues and to different contexts of tension, where individuals opt for a bystander stance while their agency could make a difference.

In the context of this study, 42 passive bystander youth aged between 18 and 24 years old, supportive of the Syrian refugee resettlement, constructed knowledge about themselves. This knowledge facilitated the development of their agency. Towards the end of the interviews, youth affirmed that they were ready to play an active role in confronting social media propaganda against refugees. Further, they realized that social media propaganda influences people’s offline behaviours towards refugees and they became ready to anticipate offline anti-refugee behaviours and address them.

To involve youth in learning about themselves and developing agency, I used techniques stemming from Personal Construct Psychology. The uniqueness of these techniques is their power to engage interviewees in in-depth transformative discussions.

Anybody who wishes to use them would need to be immersed in Personal Construct Theory (PCP) and obtain a rigorous training to develop interviewing skills in PCP, such as suspending own personal values, listening credulously, being reflexive and verbally skilled and taking account of culture-dictated constructs.

My knowledge and skills in using the techniques evolved with every interview I conducted. Any educator, social worker, or parent who would choose to use the aforementioned PCP techniques to address sensitive and controversial issues should expect that there is a learning journey involved in using such in-depth discussion approaches.

Learning and Behavioural Goals through Adopting the Model

The Get Ready to Act Against Social Media Propaganda Model by Nadia Naffi is licensed under a Creative Commons Attribution-NonCommercial-NoDerivatives 4.0 International License. 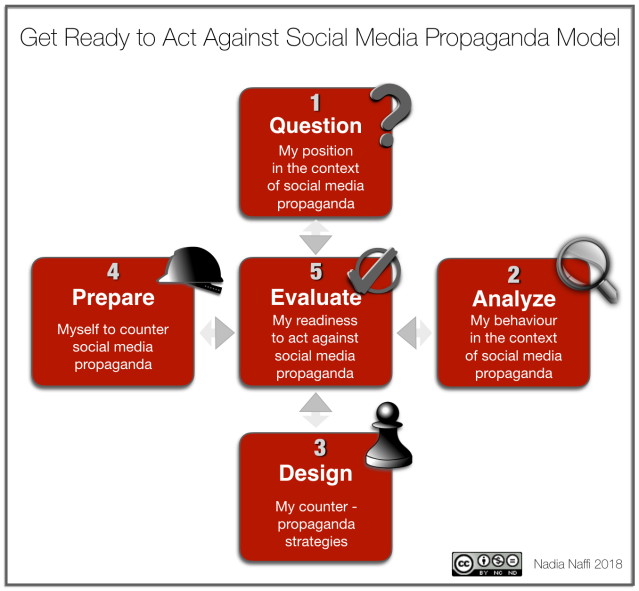