This piece was published in the Conversation Canada. and reprised in the National Post.

In 2018, the Syrian refugee crisis entered its eighth year. The return of expatriates to Syria is challenging. More and more Syrians are displaced.

Since the series of terrorist attacks that shook Paris and the Western world in 2015, propaganda, often masquerading as news, has dehumanized Syrian refugees. Agitators online and even some journalists have depicted Syrians as terrorists and as an existential threat to the Western way of life.

This has led to significant political shifts in many host countries, including Canada.

In 2015, a “No immigration of 25000 refugees petition” was launched to suspend the resettlement of the 25,000 Syrian refugees. The petition collected more than 75,000 signatures.

In 2016, Angus Reid Institute (ARI) surveyed 1,507 Canadians. The results stated that two-in-five respondents opposed the resettlement of Syrian refugees. In 2017, ARI conducted another survey with 1,508 Canadians: 41 per cent of the respondents urged the government to stop taking more refugees, and 40 per cent disagreed with how the federal government handled the resettlement of Syrian refugees.

So while many Syrians succeeded to escape the deadly conflicts in Syria, the population now has new battles to win. Many will have to survive labour-market discrimination, residential segregation, xenophobia, racism and social exclusion, to name just a few of the challenges.

A recent World Bank report on global migration and labour markets explains that migration provides large overall benefits to the destination country. However, bad policies or a lack of helpful ones can create barriers to success. 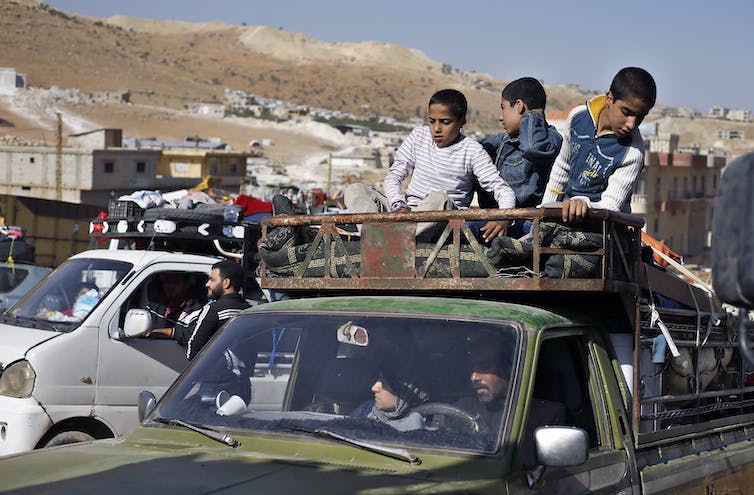 Syria needs its skilled population to help with the reconstruction — by returning home or by contributing to the country through remittances, that is, wages sent back. But the Syrian diaspora is at high risk of being unable to do either of these things because of the negative propaganda targeting its image.

And in this way, the crisis becomes more than a civil war.

The global rise of xenophobia

Elsewhere in the world, anti-immigrant and refugee sentiments are on the rise. United States President Donald Trump triggered a 600 per cent rise of online hate speech. President Trump uses the negative image of immigrants to justify outrageous and inhumane behaviour.

The Austrians included the far-right Freedom Party in their government. The authoritarian anti-immigrant Prime Minister Victor Orbán returned to office in Hungary.

Read more: The Trump effect in Canada: A 600 per cent increase in online hate speech

In a stunning turn-around, Merkel accepted the idea of a migrant border camp after being a fierce supporter of integration and resettlement. Giuseppe Conte, Italy’s Prime Minister, formed a government of a coalition of far-right and Eurosceptic parties, calling for an “obligatory” redistribution of asylum seekers. Conservative Doug Ford who recently became premier of Ontario made recent comments about “taking care of our own first.”

An infamous white supremacist, Faith Goldy is running for mayor in Toronto. In this way, racists, xenophobes, Islamophobes and bigots are forcing their way into public debates.

The Syrian crisis consists of more than the displacement of millions of people. It also includes “overreaction and panic, fueled by a series of misconceptions about who the migrants are, why they come, and what it means for Europe,” according to Daniel Trilling, editor of New Humanistmagazine. He says, “the cameras have gone, but the suffering endures.”

Hate speech propagandists and news media spread many of these misconceptions. Social media propaganda can be a powerful information poison and harm both expatriates and host societies. 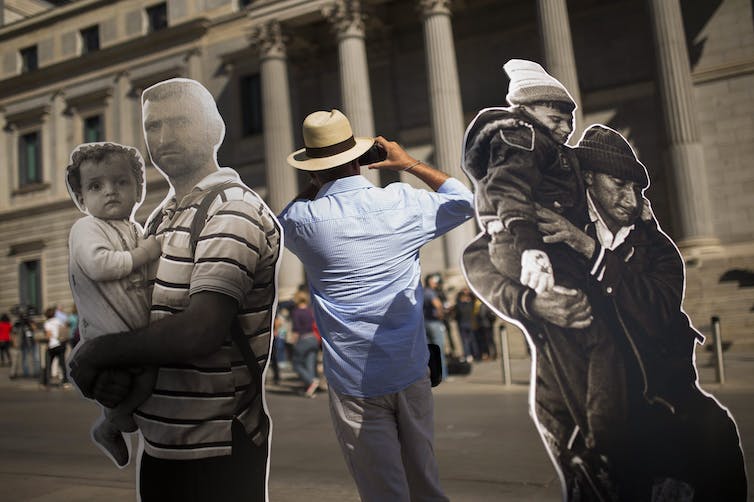 International Amnesty NGO placed pictures of Syrian people who fled due to the war in downtown Madrid, demanding an agreement with the EU in 2015 to shelter around 17,000 refugees. (AP Photo/Francisco Seco; Amnesty photos by: Samuel Aranda and Maria Jou Sol)

Feeling excluded and labelled as the enemy can have detrimental consequences on the Syrian diaspora’s emotional, psychological and thus productive capabilities. Pyschologists have long explained that belongingness is a fundamental need.

Economist, Amartya Sen explains that intolerance and racism lead to the waste of productive power. Unemployed and underemployed refugees are at risk of losing their skills and cognitive abilities. Many become discouraged. Some may lose their self-esteem and suffer from intense mental agony.

How can a crushed diaspora become a productive and self-sufficient entity in destination countries to help rebuild Syria?

Propagandists use several strategies to exploit an ignorant public through social media.

Propagandists use “us/them” dichotomy narratives to depict Syrian refugees as incompatible with Western culture and as a risk to the safety, well-being and political and economic environment of the west. They cash in on the lack of contact between host societies and refugees to spread their lies. The lack of contact prevents people from verifying and validating any hypothesis they may have about the “Other.” 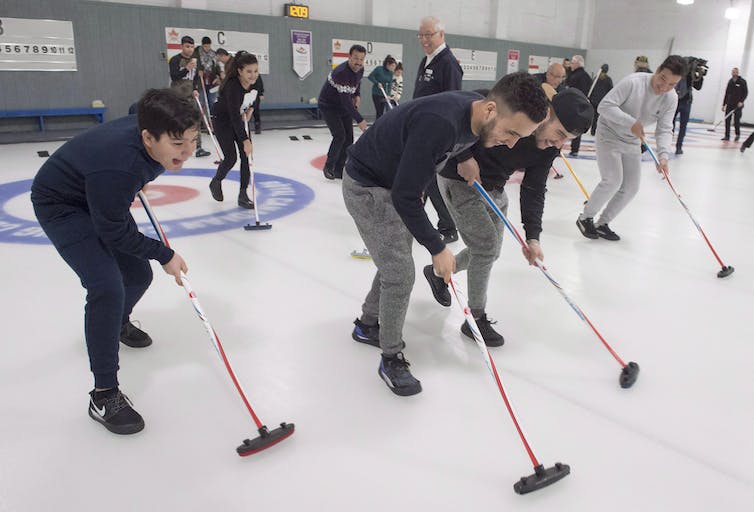 Afghan and Syrian refugees practice sweeping during a refugee curling day at the Royal Canadian Curling Club in Toronto on March 15, 2017. THE CANADIAN PRESS/Frank Gunn

This leads to an increased bias in favour of one’s own group and against all the others. Categorization is a normal psychological process essential to making sense of others’ behaviours. But, it is an excluding act when associated with stereotyping and racism.

Social media propagandists are also exploiting a perception of a general loss of control. A recent study conducted in Canada, the U.S., and the U.K. shows that residents in a host society who believe they have no control over who enters their country have higher levels of anti-immigrant sentiments.

Canada has accepted 40,081 Syrian refugees since November 2015. Far-right extremists and politicians with agendas exploit the perception that many Canadians have no control.

An image re-boot to save the diaspora

Social media propaganda has caused a paralyzing mistrust between many members of host societies and refugees. Hosts worry about refugees’ “real intentions,” and refugees worry about being excluded by those who want to keep them in Syria despite the deadly conflicts.

A distrust also exists between Syrians, a divided population torn by the civil war.

Telling human stories about successful refugees is not enough to change people’s perception of refugees. Boycotting social media to stop the spread of hate speech or misinformation is not a viable option. 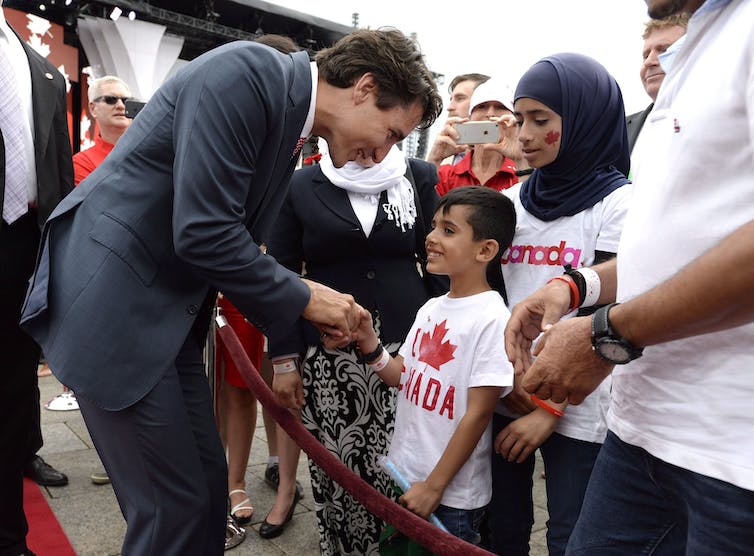 To rebuild Syria, we must start by including and trusting its people. To trust them, we must create ways to view them differently, free from the manipulations of those with xenophobic, racist agendas.

Failing to reconstruct the image of Syrians and Syrian expatriates can lead to their irreversible exclusion and collapse, and thus to the loss of any hope for a prosperous Syria. Both Syria and hosts countries will bear the consequences.

The World Bank needs to add an image reboot of Syrians and Syrian refugees to its agenda. But also, we, global citizens, all have ethical, moral and social responsibilities to counter social media propaganda and to ensure this image reconstruction before it is too late.